Public and stakeholder feedback on the Transit Concepts presented in the spring and summer of 2021 showed a preference for a bus network where there were fewer, but more frequent routes that would allow most people to get to places in less time.

The Draft New Network would have major benefits for most residents in Suffolk County and would provide better access to jobs and key destinations for people traveling to and from Suffolk County. In short, the Draft New Network provides more frequent, more useful transit service in the places where most people will benefit from it, putting more opportunities within their reach.

The Draft New Network would

The Draft New Network does come with some trade-offs. Some people and places would be much farther from service as routes are consolidated. Routes still cover most people and jobs in the county, but now 57% of residents and 67% of jobs are near some transit service, compared to 69% of residents and 76% of jobs covered by the Existing Network. For more details, read the full Draft New Network Report. 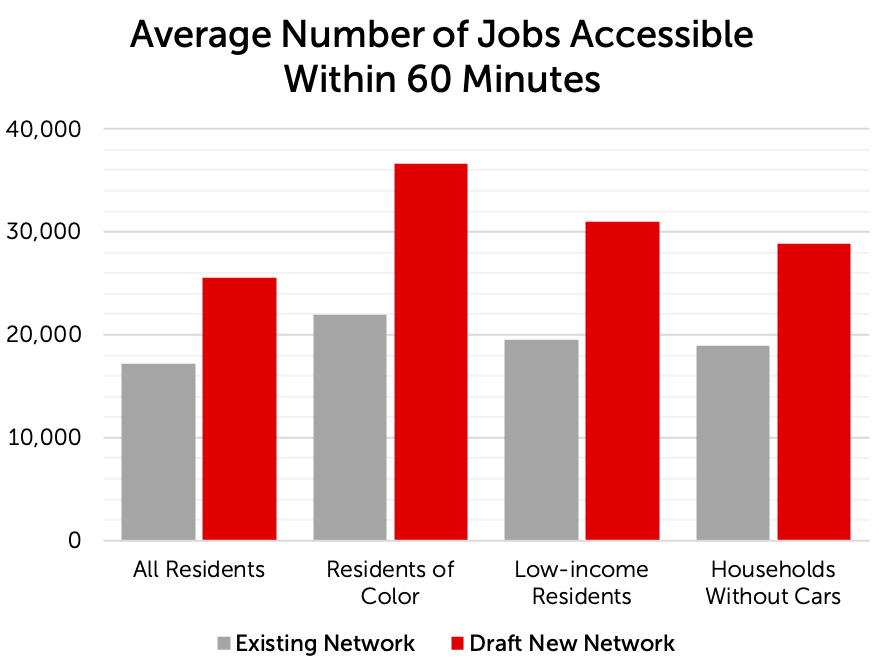 The map below shows the Existing county-wide bus network in the same color scheme.

Click one of the links below to review a closer view of both networks for different parts of the County:

Click here for a table of each route in the new network and a description of the route paths.

Explore an interactive map of the Draft New Network and compare your access to jobs and opportunities here.

Today's Existing Network has very poor reliability: the average route is on-time only about 40% of the time. This poor reliability is due to schedules that have not been updated in many years, and therefore are not accounting for changes in traffic patterns. Improving reliability to a more reasonable level would require an investment of at least 15% in additional service to account for slower speeds.

The Draft New Network invests an additional 15% to ensure that the new routes will run reliably on-time and invests an extra 5% to provide more consistent evening and weekend service for the redesigned network. In total, the Draft New Network requires about a 20% increase in investment in fixed-route transit by Suffolk County.

Today's Existing Network includes an on-demand pilot zone in the area from Southampton to Sag Harbor: Suffolk Transit On-Demand. On-demand transit is a form of transit where a rider can request a pickup, either via a smartphone app or by calling a reservation number, and a vehicle is dispatched to pick you up. The process works similar to app-based ride hailing services such as Uber or Lyft, but you may be asked to walk a short distance to a corner for pickup, and other passengers may be picked up or dropped off during your shared ride.

Tell Us What You Think!

The Draft New Network is just that, A DRAFT! We want to hear from you about whether you prefer this network to the existing bus network and if you have any specific changes you'd like to see.

We Want to Hear Your Feedback